Autistic Disorder in Children, Youth and Adults: Information for Families

Summary: Autistic DIsorder is a condition where individuals have severe problems with language, communication and social interactions, and typically have problems with repetitive behaviours, as well as sensory processing problems.
Add to Info Cart
PDF 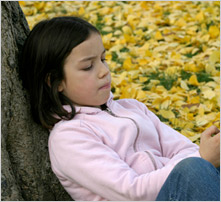 This handout is specifically focused on Autistic Disorder (aka Autism, or Pervasive Developmental Disorder), which is one of the Autism Spectrum Disorders (ASDs).

A young boy plays hours on end busily lining up cars in perfect rows. A girl at school flaps her arms wildly whenever she gets excited. Another student constantly rocks back and forth. All of these children and youth have Autistic Disorder.

Autistic Disorder is a complex developmental condition that typically becomes apparent during the first few years of life, and affects a person's behaviour and ability to relate and socialize with other people.

Due to differences in how their brains develop, people with Autistic Disorder typically have:

How Common is Autistic Disorder?

Autism Spectrum Disorder (including Autistic Disorder, along with Asperger's and PDD NOS and others) is one of the most common developmental disabilities with studies showing that it occurs in about 0.6% or approximately 1 in 165 children (Fombonne, 2006).

Of the Autism Spectrum Disorders, Autistic Disorder is the most common of all ASDs, followed by PDD-NOS, Asperger's, Rett's (extremely rare) and Childhood Disintegrative Disorder (extremely rare) (Fombonne, 2003).

It is felt that autistic spectrum disorders are due to a variety of numerous complex factors (including genetic and environmental causes), and not to any single one cause. It is generally accepted that ASD is a neurodevelopmental condition due to the child's brain functioning and being wired differently.

There is excellent evidence that ASDs are NOT caused by vaccines or mercury.

Interestingly, there appears be a significantly increased risk of having a child with autism if both parents are in a technical field such as engineering. There is a theory that having "just enough" autism traits may be helpful in our society, because it helps with technical fields such as engineering (Baron-Cohen, 2002). Such individuals are better able to deal with technology and objects, areas that have contributed greatly to our modern age.

Signs and Symptoms of Autistic Disorder

Children with autism may appear relatively normal early on, but usually by age 24-30 months, parents may notice differences or delays in various areas such as language, play or social interaction:

Lack of eye contact and use of gestures such as pointing at objects are particularly important early signs for parents to be aware of.

Overall, people with autism tend to have difficulties in these following areas:

How is Autistic Disorder Diagnosed?

Autism is diagnosed by seeing a professional such as a psychiatrist or psychologist with expertise in this area. There is no blood test or lab test that can be done to see if someone has autism or not.

The following are the official diagnostic criteria for Autistic Disorder from the Diagnostic and Statistical Manual of Mental Disorders (DSM-IV):

a) marked impairment in the use of multiple nonverbal behaviors such as eye-to-eye gaze, facial expression, body postures, and gestures to regulate social interaction

b) failure to develop peer relationships appropriate to developmental level

c) a lack of spontaneous seeking to share enjoyment, interests, or achievements with other people (e.g., by a lack of showing, bringing, or pointing out objects of interest)

2. Qualitative impairments in communication as manifested by at least one of the following:

a) delay in, or total lack of, the development of spoken language (not accompanied by an attempt to compensate through alternative modes of communication such as gesture or mime)

b) in individuals with adequate speech, marked impairment in the ability to initiate or sustain a conversation with others

c) stereotyped and repetitive use of language or idiosyncratic language

3. Restricted repetitive and stereotyped patterns of behavior, interests, and activities, as manifested by at least one of the following:

B. Delays or abnormal functioning in at least one of the following areas, with onset prior to age 3 years: (1) social interaction, (2) language as used in social communication, or (3) symbolic or imaginative play.

C. The disturbance is not better accounted for by Rett's Disorder or Childhood Disintegrative Disorder.

Other Conditions that May Occur Along with Autistic Disorder

Despite the difficulties, there are many notable examples of people with autism being geniuses in specific areas, such as: having a photographic memory for anything that see or read; being ‘human calculators'  with the ability to solve complex mathematical problems as well as skills at music and art/drawing.

Although the typical person with autism does not have such extraordinary talents, they nonetheless often have abilities such as:

Finally, perhaps one of the biggest strengths of individuals with autism disorders is their tendency to be always honest and genuine. Whereas a neurotypical child will often tell a lie to avoid getting into trouble, parents of children with autism will talk about how these children always tell the truth, even if it means they will get into trouble. Indeed, in the modern world we live in, the world would be a better place if more people could share the same sense of honesty.

Early intervention is key, meaning that the earlier the interventions are started, the more effective they will be. If you suspect that your child may have Autistic Disorder, do not delay; have your child seen by a family physician or paediatrician.

There is no one single treatment for Autistic Disorder. A comprehensive treatment plan may include some combination of the following:

Various types of therapies are available, including (but not limited to):

Because there are constant innovations in the field of autism, readers are advised to consult websites such as the Canadian Autism Intervention Research Network (CAIRN) [link: www.cairn-site.com] for the most up-to-date information about treatment.

Most children with autistic disorder cannot be simply placed in the regular class and school environment like other children. Making the school aware of the diagnosis of Autistic Disorder so that the school can implement an individualized education plan (IEP).

In addition to help with academics and the standard school curriculum, students with autism should also have explicit training in the "hidden curriculum" such as social interactions and social cues, as well as functional living skills.

Children with autism need to be explicitly taught life skills. For example: learning to cross a street safely; how to make a simple purchase; asking for help when needed. Skills that can help the student be more independent and have more personal choice and freedom in the community are important.

To be effective, any approach should:

A generation ago, most people with Autistic Disorder were eventually placed in institutions. Nowadays, the situation is improved. With appropriate services, such as day programs and special needs workers and other supports, many families are able to support their child with autistic disorder at home. Other options include specialized group homes, and assisted living arrangements.

Is there a Cure?

Autism is lifelong. Unlike other conditions like having an infection (for which you can simply take an antibiotic and get cured), there is no "cure" for autism spectrum disorders, as there is no way of "fixing" the brain differences which result in autism.  However, finding out early that a child has autism does allow for families and schools to better help the child, as opposed to simply ‘blaming the child' (or family) for the problems, as happened in the past.  With early, intensive supports, many symptoms may lessen as the child grows, and some may even disappear entirely. Nonetheless, most children and adults with autism will continue to have some degree of autism throughout their lives.

There are currently no related patient handouts.
Add to Info Cart
For communication interventions: Promote language development by creating opportunities to use communication skills Assist the child’s communication by providing pictures the child can point to when necessary. These visual aids will promote the child’s success at conveying thoughts and foster a positive experience for everyone in the classroom. Support the messag...
More...

For all children with ASD:

Special thanks to Dr. Bostic and the School Psychiatry Program at Massachusetts General Hospital for permission to reproduce these recommendations.

Add to Info Cart
Examples of Common Workplace Accommodations   Accommodations should be based on your needs and the employer’s resources. There is no standard list of reasonable accommodations, but here is a list of commonly provided workplace accommodations: Job coach assistance in hiring and on the job mentoring as necessary. Job coach/mentor could be from an external agency or be f...
More...

Iris the Dragon Books
Iris the Dragon is a charity which creates educational material for adults and young readers to help facilitate a conversation between parents, teachers and children about issues relating to mental health and wellness. Now approved by the Departments of Education for the Province of Manitoba and Nova Scotia as acceptable resource material for their mental health curriculum, Iris the Dragon's books address a variety of emotional, behavioural and neurodevelopmental conditions and recognize the importance of family, school, and community in promoting the potential of every child and youth, regardless of mental health challenge.
Iris the Dragon (Charity)
Audience: Public (www.ementalhealth.ca)
Resource type: Printed materials including handouts, brochures and books

OurHealthyMinds
OurHealthyMinds is a mental health website from the Nova Scotia Health Authority. It celebrates the many ways we can be well, and honours the many ways we can experience mental illness - as an individual, a caregiver, a parent, a child or loved one.
Nova Scotia Health Authority
Audience: Public (www.ementalhealth.ca)
Resource type: Websites including blogs, support forums

There are currently no additional screening tools attached to this article.
Filter by age:
Add to Info Cart
For communication interventions: Promote language development by creating opportunities to use communication skills Assist the child’s communication by providing pictures the child can point to when necessary. These visual aids will promote the child’s success at conveying thoughts and foster a positive experience for everyone in the classroom. Support the messag...
More...

For all children with ASD:

Special thanks to Dr. Bostic and the School Psychiatry Program at Massachusetts General Hospital for permission to reproduce these recommendations.

Add to Info Cart
Examples of Common Workplace Accommodations   Accommodations should be based on your needs and the employer’s resources. There is no standard list of reasonable accommodations, but here is a list of commonly provided workplace accommodations: Job coach assistance in hiring and on the job mentoring as necessary. Job coach/mentor could be from an external agency or be f...
More...